Get A Free Quote Now

Get A Free Quote Now
Menu

Forkserve Pty Ltd are proud to announce that we have been nominated as a finalist in the Australian Small Business Champion Awards 2020.

The Australian Small Business Champion Awards is the ‘Oscars’ ™ for Australian small businesses, and for Forkserve to gain national recognition via such a prestigious body is unquestionably an honour, and the culmination of nearly forty year’s hard work in the Australian forklift industry.

Forkserve Pty Ltd is an Australian owned and operated family business, established in May 1981 by Ross and Sharon Jack, and began modestly, with nothing more than two people and a dream. Ross Jack was a whiz at fixing all things mechanical and Sharon was adept at bookkeeping and customer service.

Of course, launching a business is an era when Blondie’s ‘The Tide Is High’ was number one in the charts and ‘Raiders of the Lost Ark’ was the darling of the big screen, was a radically different proposition than launching a business today. With no internet, Google or social media, Ross and Sharon had to grow the business the old-fashioned way: by being extremely good at what they did, and by putting in a great deal of leg work!

Initially, Ross and Sharon started out by visiting every relevant Sydney business and industrial site they could find in their dog-eared copy of the Gregory’s Street Directory. This meant thanklessly pounding the pavement and dropping off business cards and brochures; and then following up a few days later to see if Forkserve could be of any service to them. Sharon is a natural people-person and was always raised to put other people’s needs first. So establishing a rapport in these informal ‘meet and greets’ came naturally to her. As her late parents were fond of saying:‘There are two types of people in the world. One who walks into a room and says, ‘Here I am!’ and one that walks into a room and says, ‘There YOU are!’. Always be the latter kind,’. It’s an axiom that Sharon still keeps close to her heart.

It took a while to establish the business – as these things always do – but eventually work started coming in with a degree of regularity that enabled Ross and Sharon to be able to afford a small advert in the Sydney yellow pages. This remember was back when ‘Yellow Pages’ was the main form of advertising small businesses used to establish themselves. Gradually word-of-mouth and repeat business allowed the company to grow large enough for them to rent a small factory in Kings Park and expand their business with their first official hires. From that point, Forkserve Pty Ltd grew until Ross and Sharon were finally able to purchase an industrial block of land in Arndell Park and build the factory they still own and operate to this day. 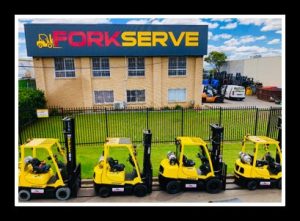 In 1998 and 2,000 respectively, Ross and Sharon’s daughters joined the company to further the family legacy and to take over the day to day running of the business; with Ross and Sharon taking on a more advisory role, due to Ross suffering ongoing health issues.

In 2020 Forkserve Pty Ltd continues to operate on the two core values that made the business great: industry-leading technical expertise and honest-to-goodness old fashioned customer service. Or as Ross likes to say: ‘Always deliver what is says on the can!’.

Running a project and need to hire a forklift? All Areas Forklift Hire can help you with all your short and long term hiring needs.
BOOK NOW